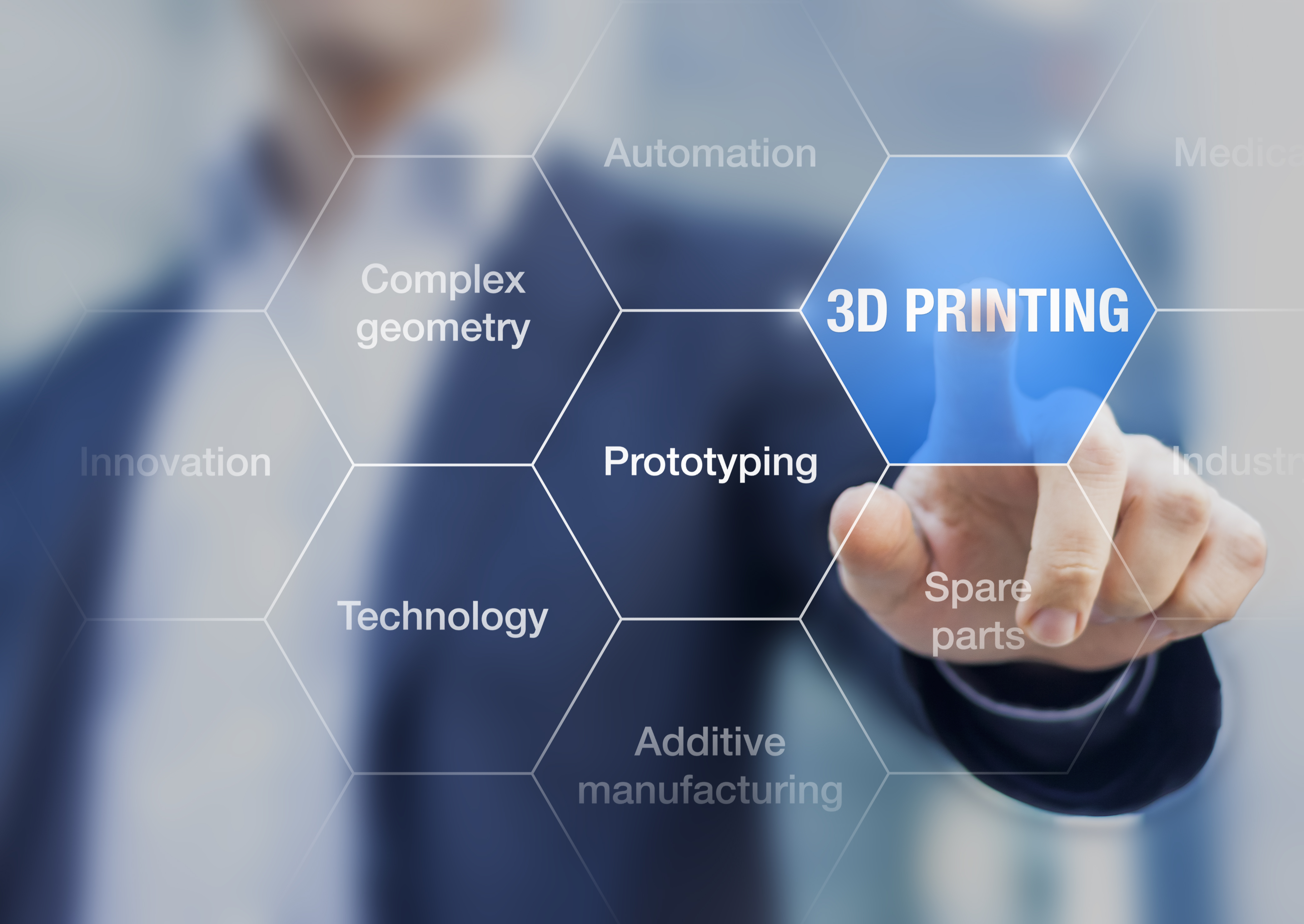 Sales 4b2b's offering covers the entire value chain. From the idea to the ready-to-install product, all steps can be offered. We are ready to inspire and advise you on complex challenges and innovative solutions, tailored to 3D metal and plastic printing.
Additive manufacturing ISO 9001 ISO 13485 ISO 9100 Sales4b2b Metal printing Plastic printing Online portal SLA SLM SLS

CAD models are professionally built and prevent unforeseen errors in additive manufacturing. The rework of the components is carried out by high-level partners of Sales4b2b in the usual highest precision and quality. Depending on the requirements of the components, the surfaces are hardened, ground or otherwise refined. Do we know your requirements? Yes, due to our certification in the automotive (TS16949), medical (ISO13485), aircraft industry (ISO9100) and in general according to ISO 9001, we set the highest standards in process compliance and implementation.

To make it easier for you to access 3D printed parts, we are BRAND NEW offering an online portal for direct ordering. Upload your design file (e.g. STEP file) select the desired printing technology and material and get your unbeatable price! Order today on our brand new online portal.

A little more history on the possibilities and applications of 3D printing technology: 3D printers can be used for a wide variety of needs and industries. The objects to be produced are formed not by removing, milling or grinding from the base material, but by depositing different materials horizontally and layer by layer. The 3D printing process knows no design restrictions; on the contrary, it opens up ever new spaces for users with almost limitless possibilities. We are limited only by our imagination. The basic principle is always the same. A three-dimensional template in STL (Standard Triangulation Language), VRML (Virtual Reality Modeling Language) or X3D (Extensible 3D) format serves as the construction manual. Based on this information, the 3D printer creates the desired product layer by layer from fusible materials, powder or a specific liquid. In the following, we would like to present some areas of application where 3D printers are already being used successfully:

In medical technology, 3D printing has spread at a rapid pace. In no other industry is 3D printing technology used more frequently, especially in the field of implantology. The trend will also continue, as the demand for prostheses, dental implants and medical products will continue to rise in the future, especially against the backdrop of an increasingly aging population. Hearing aid shells and ear moulds can already be produced today using 3D printers and can be ideally adapted to the special and very individual needs of the wearer; this shows the great potential of 3D printing. 3D printers are also now widely used in implantology to produce prostheses. Whether it's artificial knee joints, cruciate ligaments, pelvic bones or breast bones, all components can now be manufactured with a 3D printer and then implanted for a precise fit. 3D printing technology has been around for some time in dentistry. There are already powerful devices that can produce up to 400 custom-made dental crowns per day. Due to the millimeter-precise production, a very high fitting accuracy of the dental crown or the dental implant in the jaw area can be achieved here as well. It is now conceivable that dental practices will in future manufacture dental crowns, bridges or implants themselves using special 3D printers - i.e. without commissioning a dental technician or dental laboratory.

One of the largest areas of application for 3D printers is mechanical engineering. Due to the fast, flexible, tool-free and cost-effective production of individual parts and small series, the 3D printing process has spread rapidly in this industry. The freedom of design is also unique. For example, Siemens developed a gas turbine whose turbine blades were created entirely in a 3D printer. Operation was successfully tested under full load - a sensation.

One of the earliest adopters of 3D printing technology was the automotive industry. 3D printers were primarily used for the production of prototypes. The advantage is the time- and cost-saving in-house production of the required components. On the one hand, as 3D printer technology continues to evolve, on the other hand, the initial cost of the equipment is becoming more and more affordable. This is good news for repair shops and classic car enthusiasts. Missing or defective trim parts for vehicle interiors can be reproduced from plastic relatively quickly and inexpensively. There are already companies specializing in the reproduction of automotive spare parts using the 3D printing process. In 2014, a model test produced the complete chassis of an electric car using a 3D printer. A sign of what is possible with 3D printing.

Stable individual components such as fuel nozzles, turbine blades and sensors are now being produced by aircraft manufacturers themselves using 3D printers instead of sourcing them from subcontractors. Delivery bottlenecks, which are associated with considerable costs, are a thing of the past. Aircraft manufacturers are already aiming to produce complete aircraft engines with 3D printing machines in the coming decades. For aircraft manufacturers, 3D printers are the technology of the future, offering many advantages. Materials made of titanium, stainless steel or aluminum are used for the production process. Other advantages: The new printing technology reduces dependence on suppliers and the components produced have a very low weight, which saves valuable fuel.

A 3D printer helps design and engineering companies produce initial product ideas at short notice. 3D printers are also becoming increasingly popular in development departments in the automotive or mechanical engineering industries, as this process can be used to create realistic and tangible test models in a very short time. Product development times can be drastically reduced. With regard to interdepartmental cooperation, especially in the example of measurement comparisons or the determination of the measurement strategy with other company departments, all participants involved in product development can examine the generated workpiece and agree on further measures without long waiting times. Product developers and engineers have the opportunity to sufficiently test the functionality on the prototype and, if necessary, to optimize it in a timely manner before the desired product goes into series production, thus incurring high costs. In the context of customer or employee presentations, such test samples can be clearly demonstrated. They are also ideal for display at trade fair booths or for creating advertising photos.

Spare parts are important when it comes to the functionality of a technical device. The more expensive the device, the more important the spare part in order to ensure the readiness for use and service life of a product in the long term. Until now, manufacturers were forced to stockpile certain spare parts for specific product series over several years in order to ensure an appropriate supply of spare parts for the devices produced. Thanks to the new 3D printer technology, spare parts that are rarely needed can be produced quickly and cost-effectively on demand.

Furnishings such as chairs, tables, sideboards, lampshades and garden furniture are also already being produced using 3D printers. In private households, they are now all the rage. The possibilities are manifold, even unlimited. Do you have an idea, do you want to create something new, do you need new technologies for this? Try the modern 3D printing solution of today. Sales4b2b will gladly advise you and support you in placing inquiries via our new online portal. We are looking forward to realize the impossible together with you.

Always stay up to date